Waterkloof Estate, the eco-conscious wine and fine dining marvel on the elevated outskirts of the Helderberg Winelands, reaffirmed its natural principles with the addition of world renowned, naturally matured Healey’s Farmhouse Cheddar to its family.

“Since opening our doors in 2009, our restaurant has been a firm admirer of this world beating, artisan cheddar produced by this boutique cheesery in Somerset West. We find it so delicious in fact we have decided to make it part of the Waterkloof family,” shares Waterkloof proprietor Paul Boutinot. 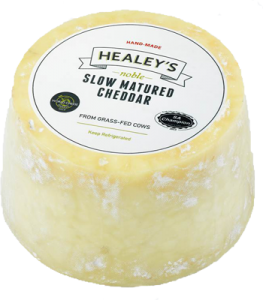 “Age is not important unless you are a Healey’s cheese or a Waterkloof wine. They both unlock nature’s true potential through traditional, time-honoured methods and adhere to natural principles, sustainable farming methods and minimal intervention,” adds Paul.

Consistently in the world’s top four cheddars since its inception in 2005, Healey’s Farmhouse Cheddar has over the years garnered quality accolades worldwide for its cheddar cheese, aged anywhere from eight to 24 months. In 2006 Healey’s excelled at the coveted World Cheese Awards in London, bringing home Gold as well as Silver, and in 2009 it claimed Gold status at the World Cheese Canary Island Awards. More recently it churned out a Bronze medal at the 2011 World Cheese Awards.

Following the same traditional recipe of 150 years ago, Healey’s famous cheddar is made by hand with unpasteurized, free range Friesian milk and still matured with a muslin cloth in a natural cave like environment which encourages mould growth that enhances the flavour development over a period of time. These noble cheeses, which are clothed and greased to form a natural outer rind to harness its clean, full nutty flavour, contains no artificial colourants or preservatives.

“In the late 1700?s, famous French philosopher, gourmand, and avid cheese lover Jean Anthelme Brillat-Savarin said ‘a meal without some cheese is like a beautiful woman with only one eye’. Fortunately we have the best cheese in the country, which takes pride on our famous cheese platter and pairs exceptionally well with our exclusive Circumstance Straw Wine,” explains Waterkloof chef Grégory Czarnecki.

“Healey’s Farmhouse Cheddar was the obvious choice when I selected cheese for the Waterkloof Restaurant. The unpasteurized mature cheddar was in a league of its own and incredibly versatile. I could combine it with sweet and savoury dishes. It is probably one of the best examples I have seen around the world,” adds Grégory.

“My greatest passion is to bake bread, real bread. I have devoted my whole being to baking the most natural, nutritious, beautiful bread for our local community and I have dedicated months, searching for the best local produce to serve with my bread. After tasting my way through the most amazing cheeses in the Western Cape, I found there was simply no better cheddar than Healey’s Farmhouse Cheddar” says Fritz Schoon.

To truly enjoy your Healey’s Farmhouse Cheddar, Chef Grégory suggests you keep it in a cool cupboard or ceramic cheese dish and eat it at room temperature.

Looking for a wristband supplier for event wristbands? Contact IDCbands for vinyl and tyvek wristbands.