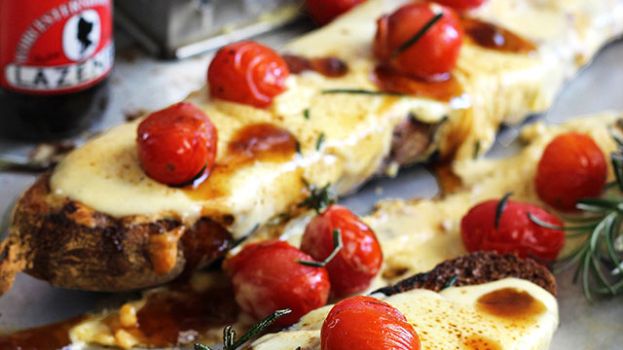 “There are as many Welsh rarebit recipes as there are days in the year, but in essence cheese meets liquid to form a thick cheesy spread. Slap it on toast, whack it under the grill and you’ve got yourself Welsh rarebit. Regardless of how you make it, the one thing you do need is really excellent cheese, specifically cheddar. One knows a good mature cheddar cheese by its texture (it’s crumbly not waxy) and its taste (so tangy it has a slight peppery burn). Healey’s Slow Matured Cheddar is such a cheese…”

Method
Melt the butter over low heat in a thick-bottomed saucepan. Stir the flour into the butter then add the beer, mustard and Worcestershire sauce, whisking constantly to prevent any lumps forming. Once smooth, continue cooking over low heat for a few minutes until it’s luscious and thick. Remove from the heat and immediately stir in the cheddar until it’s all melted into the sauce. Add the salt and taste to see if it’s enough. Allow this mixture to cool down a bit, then whisk in two egg yolks. (If you add it when it’s very hot, the eggs may scramble.) Now, if you are making traditional Welsh rarebit, simply spread this mixture on slices of toasted bread and briefly place it under a hot grill. Give it a dash of extra Worcestershire sauce and tuck in.

If on the other hand you want to go the fancy soufflé route, allow this mixture to cool to room temperature. Cut open a very crusty baguette lengthways and toast the cut side under a hot grill. Whisk the egg whites in a separate clean bowl until they’re white and stiff, then use a metal spoon to gently fold the whites into the cheese mix. Spoon this mix onto the toasted baguette and bake in a preheated 180 degrees Celsius oven (on conventional oven setting, not fan) for 5-7 minutes until the cheese is puffed up and golden on top. Serve immediately because like anything that has the word soufflé in it, this puppy doesn’t get any better with age.

A little bit about Melkkos & Merlot:
I’m a freelance recipe developer, food stylist and food and lifestyle writer. Melkkos & Merlot is my blog baby, my space where I play with new recipes, old favourites and my camera. A crazy black cat who reckons rare roast beef is an essential food group. A woman obsessed with food and wine. That’s Merlot and me. Together we cook up a storm in our cosy (read small) Cape Town kitchen.